American rap recording artist Fellon Phelps was born in Cleveland Ohio and since his professional music career started in 2016 he has dropped Snapchat, Lebron James, and King of Ohio PT 1 in 2017, Hollywood, and 36 in 2018, We Not Cool , Whatever, and Gmail in 2019, and already in 2020 Fellon Phelps released King of Ohio PT 2, Another Dead Opp, Downfall Mixtape, A Party, I Lick It, Ghetto Stallions, Bodies, African American Breed, Green Cross,Got Doe Live, The Legend of F.P, Cop killer, and Dead Homies, on May-19-2020 Malcolm X birthday Last Reigning Kingdom E.P on May 31 2020 which is Fellon Phelps actual birthday and most of these projects came out all within the first 6 months of 2020 alone making his Portfolio strong and its all available on all major music platforms already with way more to come like Comfortable Jan 1 2021, and his latest 4 singles Don’t Give A Fuck, and I Did It produced by talented beat producer Corleone, and On The West, and Blow produced by The Thrills out of London England United Kingdom which makes it a total of 31 different Projects made by Fellon Phelps that is 13 singles and 8 full albums over 61 new songs.He writes his own song lyrics and bought exclusive rights to every beat he rap on. Fellon Phelps has proved he is the most consistent hardest working song writer and performer of all-time and we don’t see any compitition for him he is the new savoir of Rap music something the culture desperately needed and when asked he stated he just want to tell his story to the world he is already rich so it’s not about money or fame. Fellon was inspired by super stars such as Ice Cube, Dr Dre, Public Enemy, Will Smith, LL Cool J, 2pac, Snoop, The Notorious Big, Jay Z, Master P, Lil Wayne, Eminem, 50 Cent, Jeezy, Gucci Mane, T.I, OutKast, Bizzy Bone, Krayzie Bone, Drake, Kendrick Lamar, J Cole, Etc. Between the ages of 7 and 13 Fellon Phelps spent alot of summers in sweet Huntsville Alabama working in the concrete construction business for his cousins Bra and Jermaine so he wouldn’t have to get money from his Parents or Grandparents to pay for his Video Game, Go Cart Racing, Micheal Jordan shoes, Nike clothes and Amusement park hobbies. He also spent hours in his cousins Val and Ci Ci’s home swimming pools in Atlanta Georgia eating good with his cousins Alexandria and Lewis as a child on vacations with his Mother and Father Phelps would have traveled the whole world more than adults at a very young age. 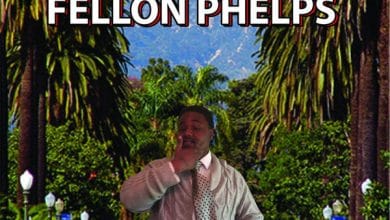